Screws and bolts are the most common types. The difference between screws and bolts is only the intended use. Screws are intended by screwing into tapped holes; bolts are intended for use with nuts. Sometimes screws are supplied with a captive washer under the screw head. They are also called SEMS. A SEMS screw is a generic term used to describe a screw pre-assembled with a free-spinning lock washer. It is a permanent assembly with the washer held in place by the major diameter of the screw thread being larger than the hole of the washer. The SEMS screw is simple, easy to use and available in many different styles making it well suited for many applications. SEMS save assembly time and eliminate the possibility that a screw will be installed without its specified washer. Normally, a bolt can also serve as a screw by using it with a tapped hole rather than a nut. 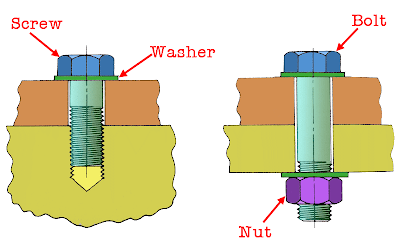 A stud is threaded on both ends. It is usually screwed permanently into a tapped hole. Threads on the two ends may or may not be identical. A threaded rod is the least common type. It is usually used when a very long threaded member is needed. It can often be purchased in a long length and then cut off as required.

An advantage of threaded fasteners in comparison with riveting, welding, etc., is that they can be easily and nondestructively disassembled. However, a disadvantage of threaded fasteners is that they sometimes loosen and disassemble themselves. The relative motion between the bolt and nut threads  is often caused by vibration, but it can have other cause such as differential thermal expansion of both parts.

The factors influencing whether or not threads loosen are:

Popular posts from this blog

Dowel pins are the fasteners used to secure two parts together. They are available in both Metric and English sizes, and carry specifications such as diameter, length, and materials. Most dowel pins are made of stainless steel, plastic, , hardened steel, or ground steel. Plastic dowel pins are made of thermoplastic or thermosetting polymers with high molecular weight. Stainless dowel pins are chemical and corrosion resistant, and have relatively high pressure ratings.

Dowel pins are often used as precise locating devices in machinery. Stainless dowel pins are machined to tight tolerances, as are the corresponding holes, which are typically reamed. A dowel pin may have a larger diameter so that it must be pressed into its hole or a smaller diameter than its hole so that it freely slips in.

When mechanical design engineers design the mechanical components, typically they use dowel holes as reference points to control positioning variations and attain repeatable assembly quality. If no dow…
Read more about this Mechanical Design Article »

A belt is a flexible power transmission element that seats tightly on a set of pulleys or sheaves. When the belt is used for speed reduction, the typical case, the smaller sheave is mounted on the high-speed shaft, such as the shaft of an electric motor. The larger sheave is mounted on the driven machine. The belt is designed to ride around the two sheaves without slipping.

The belt is installed by placing it around the two sheaves while the center distance between them is reduced. Then the sheaves are moved apart, placing the belt in a rather high initial tension. When the belt is transmitting power, friction causes the belt to grip the driving sheave, increasing the tension in one side, called the "tight side," of the drive. The tensile force in the belt exerts a tangential force on the driven sheave, and thus a torque is applied to the driven shaft. The opposite side of the belt is still under tension, but at a smaller value. Thus, it is called the "slack side."

The German engineer Otto Mohr (1835-1918) developed a useful pictorial or graphical interpretation of the equations for finding the principal stresses and the maximum shearing stress at a point in a stressed member. This method, commonly called Mohr's circle, involves the construction of a circle in such a manner that the coordinates of each point on the circle represent the normal and shearing stresses on one plane through the stressed point, and the angular position of the radius to the point gives the orientation of the plane.

Normal stresses are plotted as horizontal coordinates, with tensile stresses (positive) plotted to the right of the origin and compressive stresses (negative) plotted to the left. Shearing stresses are plotted as vertical coordinates, with those tending to produce a clockwise rotation of the stress element plotted above the s axis, and those tending to produce a counterclockwise rotation of the stress element plotted below the s axis.

The results obtaine…
Read more about this Mechanical Design Article »